On Friday the 14th, Damien and myself went to the Primary phase to help with a visit from our ‘Author in Residence’ Helen Moss. Helen is writer of the Adventure Island and Secret of the Tombs series, as well as other books.

The first the class we went to was White Doves, where the pupils told Helen about their favourite books such as The Gruffalo. Helen spoke to them about her mystery adventure books and their characters Emily, Scott, Jack and Drift the dog. Emily is the main mystery solver in the books. Afterwards they looked inside ‘Emily’s Investigation Kit’, which contained items that a 12 year old could use that would help in an investigation. Pupils took in turn to pick an item and try and guess how it could be used to solve a mystery. For example, Troy picked a notebook and thought it could be used to take notes. Then Phoenix selected plasticine which the class said was to make casts of peoples shoes. Zachery selected a wig and the student of the day 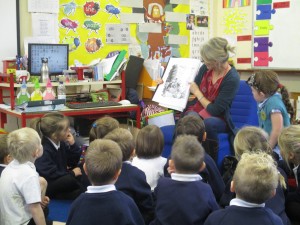 got to wear it as a disguise.

Next it was the turn of Tawny Owls who also had the chance to explore Emily’s investigation Kit. Louisa picked out some shampoo. One or two thought it could be used to stop a villain by pouring it on their head so that it made them itch and so slow them down, but it was also thought that it could also be used to make them slip!

After break, Oystercatchers had a workshop with Helen based on her story “The Mystery of the Drowning Man’. First of all we discussed the ingredients of a good Mystery story e.g. danger, surprise, problems, gadgets, clues and most important observation & deduction. Then Helen read to us from her book. We played a game in teams where we had to use observation and deduction to identify an unconscious person from 13 unlucky people that had gone missing, by asking questions to which Helen could only give a yes or no answer. 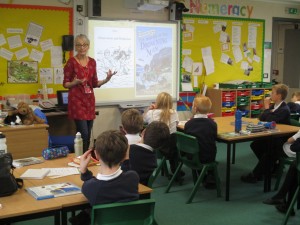 The final workshop of the day was with Golden Eagles. They all had to pretend to be evil when thinking of story! They looked at the structures of stories and had to think of a character, setting, objective and problem which they wrote on a piece of paper and put into a salad mixer which mixed them altogether. They then made two stories by picking one of each of the components. The one which I preferred goes: “There was once a man called Jeffery who lived in Princess World and wanted to do magic, but he got trapped in a cave with a massive animated hamburger!

I really enjoyed meeting the author Helen Moss and working with lots of pupils from the Primary phase.

One thought on “‘Author in Residence’ Helen Moss visits the Primary phase by Jordan, Year 8”

Thank you to Jason Billman (www.jbillman.co.uk) for allowing us to use his design as our blog header
Skip to toolbar